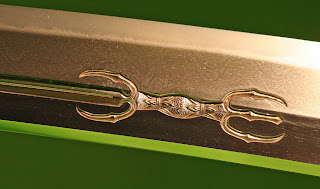 Stay tuned to SABAKU SAMURAI because sometime next week we will be featuring 4 BIG BOY swords by three of the 20th century's finest, most sought after sword smiths. Two GASSAN SADAKATSU'S, one SHIGETSUGU and an OKIMASA. You're gonna see some of the most eye watering horimono, ayasugi hada and top quality polishes EVER on kickass special-order blades by the BEST of the BEST. And YES! they WILL be for sale. A close bubba of the Sabaku Samurai is parting with several INCREDIBLE pieces from his personal collection. When we found out we pestered him unmercifully until he agreed to let us put them up on our site. You know we're all about eye candy and love to tease but this time you can actually BUY what we will be waving in front of your face.  It will be first come, first serve! SOOoooooOoo.......
BE THERE!!  ALOHA!
(book-um-danno!)
Posted by Sabaku Samurai at 11:10 PM No comments: 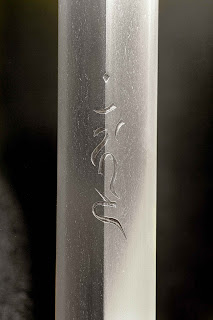 Greetings to all faithful followers of Sabaku Samurai's Blog. I have two very significant bits of information to pass on to you.  First, get a life. Second, the Sabaku Samurai has received an important communication from Max Roach Sensei about his new book coming out. If you are a regular reader of the blog then you will remember that Max is authoring a wonderful book on Nihonto and asked if he could feature some pictures of Sabaku Samurai's unusual Ken sword in it (click HERE to see my blog dated Feb 8, 2010 for the complete story and book description as well as pictures of the famous Ken). After much arm twisting and begging we relented and agreed. OK, actually we were thrilled and spent most of the day dancing jigs (be glad you were not around to see this). Given the high quality of the publication, impeccable research, unbelievable number of experts behind it, and Max's exquisite taste in Kens, this was a no-brainer. Max promised to update us on the book's progress and here is his latest.

"Hello there Sabaku Samurai people! -Max Roach here. I am glad to see some buzz about the book. Here is an update for you: The DVD materials are all assembled and going to production soon. The main feature, entitled "Forging the Future of the Japanese Sword" was made by Danial Schmidt, who recently won an Emmy for his work in making documentaries... Beautiful footage that all sword nuts will love. The layout is all done, after several go-rounds with the designers in Singapore. The final copy edit is the last step before it is approved. My editor at Tuttle is awesome and I look forward to holding the book in my hands. Until then, I will take my kids fishing and race motorcycles. Oh, I almost forgot... You can see a sneak peek of some of the page layouts on my website: mountainwinddojo.com. Feel free to contact me with questions."

There you have it. Go to his site and check it out and pray that Max doesn't OFF himself on a motorcycle before the book is finished! If you look close you will catch a glimpse of the Ken in his preview. My mom would be so proud! (if I had not already humiliated her to death, God rest her soul). The Sabaku Samurai will now make like a Ninja and vanish. Pop! Am I still here? Damn! I never could get that to work.
Posted by Sabaku Samurai at 12:53 PM No comments:

Carefull what ya bid for, YOU MIGHT JUST GET IT! 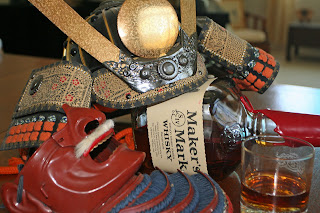 Greetings gentle readers. As most of you know, the Sabaku Samurai is a ramblin, gamblin kinda guy who likes to live life on the edge (ar ar, edge, get it? oh never mind). We also know that the Sabaku Samurai appreciates fine southern sippin whiskey and occasionally tosses back a few. On these occasions he has been known for making, shall we say, less than perfect decisions. Recently after participating in a particularly gratifying bourbon bender the Sabaku Samurai began digging around in an on-line auction house that shall remain nameless, called Ebay. Spotting what the booze told him was surely a great bargain and hidden national treasure, he put a ridiculously high bid on a tanto that was listed with a sketchy description and a few blurry distant photographs. Waking up a few hours later (still in front of his computer) the Sabaku Samurai found that he was now the proud owner of the tanto and his prize would arrive in 3 days. Flushed with excitement (or bourbon) the Sabaku Samurai could hardly contain himself for the next 72 hours dreaming of the fabulous Juyo he had managed to snake out from under the nose of all the other collectors in the world who constantly scour Ebay. In fact he sprained his arm trying to pat himself on the back. What arrived was...welllll...uh.....mmmmm....somewhat...dissapointing. The previous owner had apparently decided that the best way to preserve a 350 year old antique was to store it in a vat of salt water. After all, it worked for pickles why not a Samurai Sword? The blade was bent, chipped, tip broken and had some of the nastiest rust he had ever seen. Unfortunately for the Sabaku Samurai the auction was "as is, all sales final, no returns accepted". He was stuck. The only ray of sunshine was that the blade was signed but the tang was so wasted by oxidation it could not be read completely.

He was bummed. After shedding a few soft tears and fortifying himself with some more liquid libation he came up with a crafty plan. Sabaku Samurai's personal favorite sword polisher of all time is an amazing artist by the name of Mr. Inu Iki Sensei. He was trained in the Honami style of polish and is known for salvaging seriously abused swords. Mr Iki is also known for appreciating the finer qualities of the distillers craft. The Sabaku Samurai brought the tanto and a bottle of his best to the home of Mr Iki and began pouring. After several rounds were dispensed with, the Sabaku Samurai sprung his trap. He produced the decrepit tanto and bet Mr Iki that he could not save the blade. He wagered Mr Iki that he would pay double his going rate for polish if he could successfully get all the rust and chips out and put the blade in full polish or pay him nothing if he could not completely succeed. The gauntlet was thrown down and Mr Iki,who is a very proud man (and a bit tipsy by now), immediately (if a little unsteadily) picked it up and said "I'll take your money you round eyed freak" (he tends to talk this way after he's had a few).
So there you have it. The piece-O-crap tanto is in the capable hands of Inu Iki Sensei. What will be the outcome? Will Sabaku Samurai have to shell out big time and bow to Mr Iki or will Iki Sensei have worked his ass off for no money? Will Iki's polish reign supreme? Only time will tell. We expect the answer in a couple of weeks so stay tuned to the Sabaku Blog for the final result. We'll be BACK! (yeah that's a threat)
Posted by Sabaku Samurai at 1:38 PM No comments: