MR. BIGSHOT! who do ya think you are? 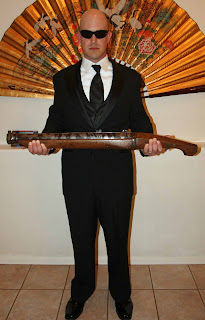 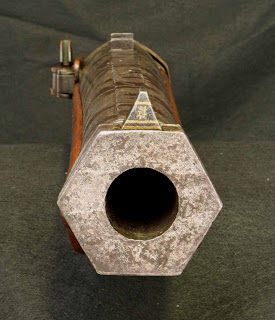 Greetings all you matchlock maniacs. Buried deep in the "collection" section of our favorite web site (Sabakusamurai.com) under "Misc" is a brief description and a couple of mediocre pictures of something very interesting. No, this time it's not night-vision shots of me and Sandra Bullock. Nope, we are showing off an even BIGGER gun (hard to believe). Recently I've had some requests for more info and better pictures of the Japanese wall cannon we have featured there. Since the Sabaku Samurai lives to serve I broke out the o'l Instamatic (how many of you remember those?) and started snapping away. The result is some nice eye candy that I'm willing to share with you (cause I'm just that kind of guy). I have included a picture of one of my overly dressed minions at the top of this blog to help give the gun some scale.  He is 6'8'' and weighs 250lbs.  OK, he's actually a 50lb dwarf and a M.I.B. wannabe but it's still a big gun. 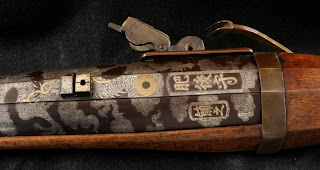 Here are the startling statistics. This is a Japanese Matchlock gun generically referred to as a Tanegashima, named after an Island that some Portuguese sailors washed up on in the 16Th century. They introduced this firearm technology to Japan and pretty soon the Japanese couldn't get enough of them. Arguably it changed Japanese methods of warfare and social structure well into the 19Th century. These things come in many different sizes, from a pistol that could fit in the palm of your hand, up to a wall gun that could shoot an 85mm diameter ball and require two men to move. This is one of the biggies. It shoots 26.5mm ball and has a 27mm diameter bore (about 1 1/16 inch or so). A bore this size makes the gun a 30 Monme and puts it in the category called oh-zutsu (literally, big gun). It is 38 inches long overall with a 24 3/4 inch barrel and weighs in at a whopping 32 lbs (so much for concealed carry)(Is that a matchlock in your
pocket or are you just happy to see me?).

The barrel of the gun is richly decorated with silver and gold damascene dragons from stem to stern. There is a damascened inscription that says the gun was made for the protection of Higo province. Underneath, the barrel is heavily signed and the makers name looks like Shigenori to me. The inscription is in grass script which is difficult to read. The stock of the gun has the same inscription in ink as is written on the barrel. Could this be a stock-agaki? (stop! please! You're killing me!) If anybody has a better translation, let me know. 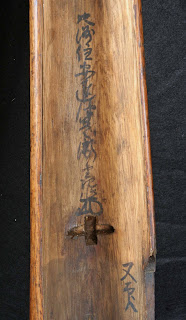 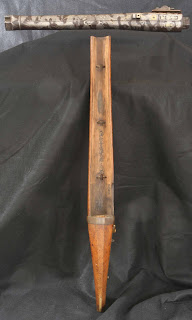 The tale of how Sabaku Samurai came by this gun is fascinating and sordid, involving conspiracy, international intrigue, hints and allegations and must be left to a more adult venue. Currently I am negotiating the movie rights to the story and yes Sandra Bullock will be offered a starring role.